The concept of IVI 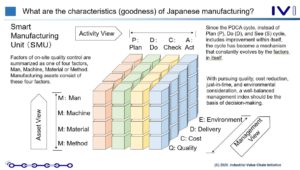 Connected Industries Open Framework (CIOF) project is a mechanism for various platforms for data utilization in companies with various workplaces to distribute their data to each other starting in 2019. The project is currently underway as a three-year contract with New Energy and Industrial Technology Development Organization (NEDO) from 2019 to 2021, with IVI as the managing organization and DMG MORI CO., LTD. and JJTEKT CORPORATION, etc. are participating.
Digitization and automation have been individually promoted by FA (factory automation) and PA (process automation) at manufacturing sites until now. As a result, even though the islands of automation, such as production lines, were connected internally, there were problems with interoperability between these existing automated islands. IVI’s vision of “Connected Manufacturing” is to create a more flexible and efficient business collaboration that transcends factories and companies, and in some cases, in situation of conflicting interests. It is necessary to build more flexible and efficient win-win business collaboration, and the CIOF will be the one to make this happen. In the NEDO project, use cases have been set for each category, and demonstration experiments are being promoted. The NEDO project has set up use cases for each category and is conducting demonstration experiments. Business Scenario WG has also launched a WG involving CIOF, and preparations are underway to start service operation in April 2022. 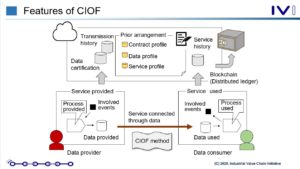 We announced the concept of Smart Thinking in April 2020. First, we define a smart organization as one in which people, things, and information are interconnected both internally and externally through digital technology for the members of the organization to recognize and share problems and create new value. It is a thinking process that produces emergent and effective knowledge by sharing the knowledge obtained through the cycle of problem discovery, problem sharing, problem setting, and problem solving within the organization, and by deepening these connections mutually. We are working in Business Scenario Working Group (WG), creating 16 charts such as “Why-Why Charts” and “Logic Charts” in order to embody Smart Thinking in a concrete way.